The teams travelled to Odessa competing against athletes from Saskatchewan in a Juvenile tournament slated on the 7th to 9th of January.  Winless in Round Robin play, Manitoba returned home stronger, more experience challenging some of Canada’s best teams in intense competitive matches.

Once again, Team Manitoba All Stars journeyed southwest to Estevan, Saskatchewan for yet another gruelling tournament.  Coaching the young ladies team, Ron Marohn was quite impressed with the rookies in the line up.  “With Nationals only weeks away, the Juvenile Girls team will be very competitive as veteran athletes complete the roster.” added captian Amber Burton.

The Manitoba Juvenile Men’s team dominated in their game opener pounding the Bruno Axemen 5 to 2.  Captain Dan Lacroix blasted the 1st goal between the pipes with only 13 seconds expired on the clock.  Team Toba surrendered losses in their next 3 matches unable to advance to the playoff  Round.    Due to mid terms, work and other commitments as so with the girls’ team, a short bench proved too much for the solid Saskatchewan offence.  However, our athletes earned major MVP selections for their efforts. Coach and MABA president Raymond Massinon stated “As Team selections are being finalized, the Manitoba host teams are not to be taken lightly. As both squads are eagerly awaiting the 20th Canadian Juvenile Championships  slated for March 30-April 2nd at the PCU Centre in Portage  la Prairie, Manitoba.”

Silver Medallions For Manitoba at 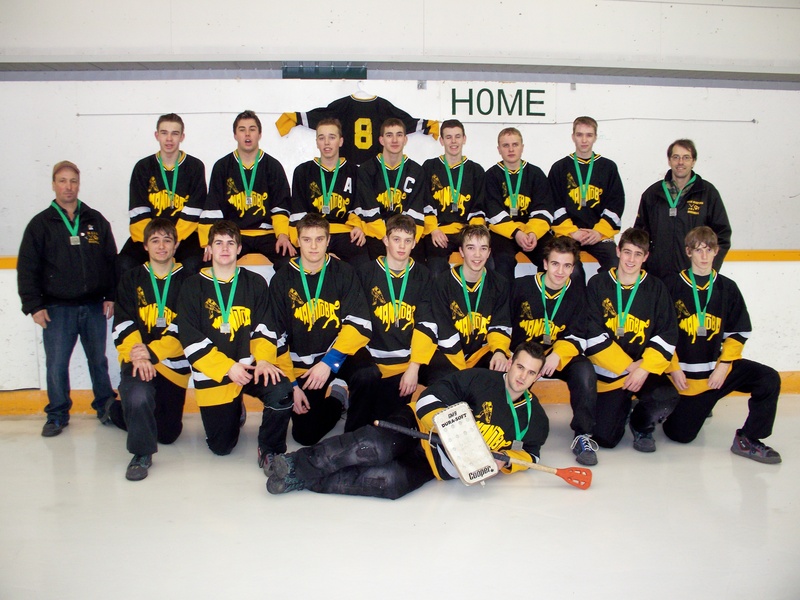 Two teams, 31 athletes and coaches boarded a motor coach at Oak Bluff, St. Claude and hit the ice surface at the Yellowhead Centre in Neepawa for a team work camp on Tuesday, March 23rd.  Then, the teams were off to Saskatchewan, site of the XIX Annual Canadian Broomball Federations Juvenile Championships slated for March 24-27 at Balgonie and White City near Regina.  The young ladies division consisted of seven teams, while the men’s had eight squads.

The Manitoba Juvenile girl’s team duelled in full Round Robin battling teams from Saskatchewan, Ontario and Quebec.  Team captain, Amber Burton noted “The team gave their best.  With one third of our roster as rookies due to injuries, other circumstances and solid competition, we were unable to pick up any wins.  But, after each match the team’s performance improved immensely giving us a solid base to work with next season.

Eight teams collided for medallions on the Jr. Men’s side, split into two divisions with a two cross over games to determine placing.  Manitoba pounded the Sting from Ontario in their 1st match only to surrender 2-1 in OT.  Then, the athletes clashed against last year champions the Odessa Bandits from Saskatchewan.  Another intense match with the Bandits edged the All Stars 2-0 in regulation.

Winless in their next 3 starts, Manitoba over powered College Brebeuf from Quebec 3-1 advancing to the Gold medal game in the B division.  Scoreless after the opening frame, Manitoba ran out of steam bowing 3-0 accepting “Silver” Medals.  “Manitoba definitely scared our opponents.  Many teams thought we’d be a push over, but they were surely mistaken.  All our games were intense and low scores.  Losing only one player next season and another year of action there is no reason why this group can’t advance to the A side in 2011.” commented Captain Dan Lacroix.

Manitoba received numerous awards at the banquet Friday evening.  Jocelyne Robidoux claimed the MVP plaque for Team Manitoba Juvenile Ladies, while Nick Guillas was the recipient for the Men’s.  Crowned the Most Valuable Goalie on the 2nd All Star Team was Michelle Ferguson for her outstanding performance between the pipes.  Joey Poncsak on defence has a brilliant tourney accepting recognition for his efforts, also named on the 2nd All Star Team.

The Juvenile represented Manitoba well at the Championship on and off the ice.  Returning home the athletes reminisced about the past week only to eagerly anticipate next year’s National slated for??  At press time the Canadian Broomball Federation was reviewing bids from two hosting committees for the 2011 Championships.

The Olympians from the St.Claude School Complex had an amazing 2009-2010 season.  Our teams captured both championship trophies at the pre-Xmas Tourney held in St.Claude on December 17th.

On the 20th of February, our Athletes motored to Glenella to compete in the Eagles Annual High School Tournament. The Stallions swept their round robin games recording 16 goals, while allowing only 3, earning 3 victories.  The hometown Glenella Eagles once again were overpowered by the Stallions in the Championship match suffering a 1 -5 loss.  For the fifth consecutive season, the Eagles Banner returns to St.Claude.

The junior High School Broomballers challenged teams from Sanford and Iles des Chênes on Friday.  Unable to record a victory in the elimination games, Haywood counted one point in each match for their efforts.  The Haywood Nomads displayed promising talent and in a few short years will be clinching championships titles.  Both Sanford teams collided in the Intermediate Championship match.  Sanford #2 edged their hometown Sabres by a 1-0 score.

Many exciting hard fought contest terminated the 2010 High School Broomball season.  A total of 4 elite teams collided at the arena for the Elite Championship Banner on March 13.  Dauphin, Alonsa, Glenella & St.Claude competed in 6 round robin elimination games.  After gruelling outstanding broomball action, the Dauphin Clippers and the Stallions earned a berth to the Championship game.

As the horn sounded after regulation the teams were deadlocked at a 3-3 score.  Halfway into the 2nd OT period, the home bench exploded as Brodie blasted the game winner past the net minder.  The Olympians remained undefeated in three High School tournaments with a record of 11 consecutive victories, dominating the High School Broomball season!!

Broomballers from across the prairie province converged to St.Claude, Manitoba,   the site of the 2009 Western Senior Intermediate Broomball Championships.  Five teams collided in the Men’s division, while three from Manitoba and Odessa Storm from Saskatchewan battled in the women’s draw.  St.Claude, nameless at their 1st provincials in 2005 clinches “Gold” in Shoal Lake in the Intermediate Division. Now christened as the”Golddiggers”, these 16 athletes rushed onto the ice at their 1st hometown Westerns on November 12 to14th.  The top three contenders settled for tie scores, even after an overtime period.  Each team recorded 2 ties and a victory against the Syrens from Manitoba.  Ending Round Robin plays with 4 points each, in a 3 way tie, the Golddiggers placed 1st after totalling goals for and against.

Captain Lynne Lesage commented “Our team consist of veteran and junior athletes.  The sheer determination and perserverance of my teammates is second to none.  With such a hard core group, I knew a championship title was in reach.”

St. Claude pounded the Syrens in their semi-final game, but to blast only one point passed Naleen Kitzen in the Syrens’ net.  The Manitoba Hexx edged the Storm from Odessa, Saskatchewan advancing to the Championship match.  Our visitors from Saskatchewan did not return home empty handed picking up Bronze medallions defeating the Syrens 5-0.

Was the Hexx going to succeed once again and cast a spell over the Golddiggers?  Whether it is at provincials or exhibition games these two teams would settle for a draw or the Hexx would narrowly edge St.Claude.

Nervous but anxious the Golddiggers began their trek for victory.  Most of the match, played at center ice, was intense and physical.  Then, Chantelle Hockridge swoop the ball to Colleen Sulatyski who successfully redirected the pass through the net minder’s legs.  The home bench exploded as the St.Claude led 1-0 into the final frame.  As the Golddiggers counted down the final seconds, Lynne dumped the ball over center ice claiming the championship title for her team!  It also has to be noted that the Golddiggers’ net minder Kayla Henton was outstanding allowing only1 point in net during the tournament.  All in all it was a golden performance for the St.Claude Golddiggers who “Struck Gold @ Westerns”.

The men’s broomball squadron, which formed in 2001 wound up on the outside looking in as they competed in their 1st Westerns in the fall of 2003 at St.Claude.  Once again our town was granted the privilege to host the event.  The action started on Thursday, November 12, with five teams battling in the men’s division for the title of the “Best in the West”.

This time, the Stallions duelled in Round Robin play.  Early Thursday, team captain Lionel de Rocquigny and his team mates, settled for 5-5 draw against the Sportsmen from Regina.  A formidable contestant, the Deez Nutz from the Foothills of Calgary, quashed the Stallions 4-1 earning their second victory at Westerns only to record two more wins placing 1st.

“Challenging teams from the Prairie Provinces is no easy task.  Sixteen athletes completed our roster and we weren’t going to back down.” added Stallions’ captain Lionel de Rocquigny.  St.Claude overpowered Parkland Chaos from Dauphin 4-1 Friday morning and went on to demolish the Edmonton Penetrators 6-2.  Earning a record of 2 wins, 1 tie and a loss, St.Claude placed 2nd in the 5 men’s field.

Pumped, the Stallions stampeded in their semi final match blasting the Regina Sportsmen by a 7-3 score.  Deez Nutz out of Calgary edged Edmonton 1-0 advancing to the Championship match.  The Regina Sportsmen proved victorious over Edmonton to earn the Bronze by a 3-2 score.

After each match the Stallions’ performance excelled.  As the intensity of the competition increased, the chemistry of the team improved on the ice. On home ice, a loss was not an option for the Stallions.

At the final game of the tournament, St. Claude won the opening faceoff, never looking back over their shoulders.  Net minder, Nathan Rey was superb between the pipes, earning himself a shutout with the assistance of his defence.  As the horn sounded, the thunderous cheer of the fans roared up the rafter, as the Stallions recorded 5 unanswered points.  Assistant Captain, Patrick Massinon stated, “Beside a few pickups this team is home based.  This is a great day, for Men’s broomball in St.Claude.”

The Manitoba Juvenile girl’s team had a great tournament.  Team Captain Brandi Abstreiter led her teammates on and off the ice at the prestigious event.  Even thought the All Stars were unable to record any wins they surrendered 2 games in overtime and two 1 point games.  Captain Dan Lacroix with assistants Nick Guillas and Brad Buisson contributed to their teams efforts.  Manitoba unable to record a victory in five start

Manitoba received several very deserving awards at the “Awards Banquet” gala Friday evening in Laval, Quebec.  Net minder, Kayla Henton graciously accepted the Team MVP award, along with the MVFG honours only to be named the best overall goalie in Canada.  Defence man, Reg Robidoux was named the most valuable Defence on the 2nd All Star team, while his teammates Ron Rosset earned the team MVP selection for his outstanding play between the pipes at Nationals. Coach, Raymond Massinon was nominated the “Overall Coach of the Year”.

The Juveniles athletes represented Manitoba well at the Championships.  Saturday at high noon the Manitobans boarded the Beaver Coach off for Winnipeg.  A slight detour granted the participants a visit to Canada’s Parliament Building in Ottawa.  The Parliamentary gardens offered many detailed events of Canada’s past, while a private tour inside the structure was very informative.  The athletes were overwhelmed as Chatalle, our tour guide, led us to the House of Commons, the parliamentary library, the Senate and then to the famous stairwell where our MP’s and Prime Minister brief reporters.

Returning home the athletes were filled with lasting memories and newfound friends.  Next year’s Nationals is slated for late March 2010 in Balgonie, Saskatchewan!!